The society has forced me to be everything I’m not, so if I tell you “I’m fine” when we exchange pleasantries, believe me not, till I proof it true.

Are you new to blogging, and do you want step-by-step guidance on how to publish and grow your blog? Learn more about our new Blogging for Beginners course and get 50% off through December 10th.

WordPress.com is excited to announce our newest offering: a course just for beginning bloggers where you’ll learn everything you need to know about blogging from the most trusted experts in the industry. We have helped millions of blogs get up and running, we know what works, and we want you to to know everything we know. This course provides all the fundamental skills and inspiration you need to get your blog started, an interactive community forum, and content updated annually.

Dedicated to everyone born in the month of August.

An excerpt from my poem ‘I’ve seen It all”

The shadow of the sun founds its way through her skull, waking up the trees of happiness that once withered away. The broken screens of her heart were  replaced by new ones, the raging sea had taught her to be the woman she deserves to be. As she walked into the class, she held her head high, she smiled at every frown, surprise and fear. It was the first time in a long while she had left her home of pain, shame and regrets. It was the first time she heard versions of laughter without letting them hunt down her soul,  It was time to let go, her parents were gone, her arms are gone, but more than that, her cravings to be accepted were gone.

She took her seat,  and opened a page to write her new life, A life unwilling to be hurt by ugly circumstances, Mary had spents lots of money in helping her get these prosthetics, and no mention of the name Robot was gonna stop her from being herself in using them.

At the end of lectures, she resumed her majestic steps, letting these words flow through her mind …

With that she closed the page of an old life to  start a new life.

Being a listening ear, could just be enough. Sometimes we get too busy to pay attention to needs of people around us, our kids, spouses, friends  get depressed and bottle up their feelings because no one is there to listen, let’s endeavour to create time for our loved ones, however busy we may be.

Maybe humans could learn from the sky to accommodate the good, bad and ugly. 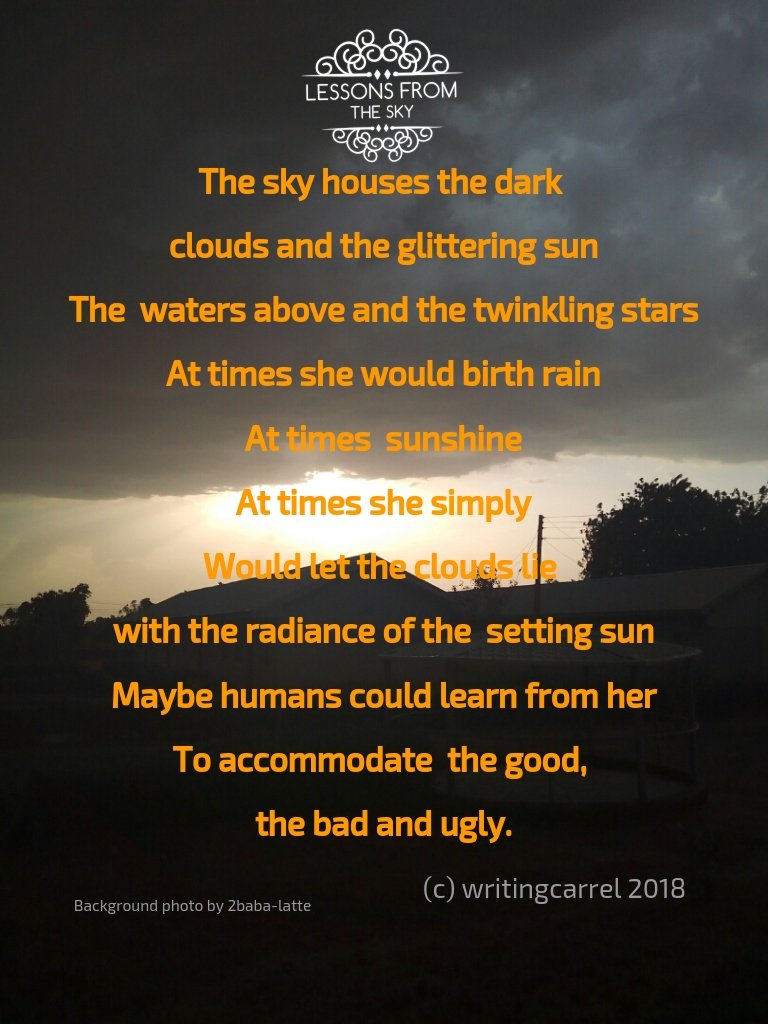 Minutes into the lecture time, the front row was still not filled up. People kept whispering and directing their gaze towards her, she noticed everyone had kept their distance, but it was none of her business, after all, making friends was just a minute aspect of being a student to her,
She kept humming her favourite music… Now that she had hands, she would do all of those things she had stopped doing, her thoughts carried her to the mountains of imagination, that she barely noticed how other students reacted towards her again.

The lecturer walked into the class, his face beaming with smiles.

“Hello, everyone, my name is John Nnanda, I will be taking you on  philosophy”

He paused as though he was expecting replies from the students, when none came, he continued

“I would love  to know y’all by name”

The students stood up in turns to introduce themselves, some names sounded so funny forcing a comic comment from the lecturer, others were so  complicated  that futile efforts made by the lecturer to pronounce, Such names gave way to a round of unceasing laughter.

Susan  had barely mentioned her name than  Aina shouted robot. In no time, the whole class was in chaos, people running here and there. All efforts made by Mr. Nnanda to bring the class to normalcy proved abortive. In his panic, the lecturer tried to keep his calm until he saw Susan’s iron hands, his eyes widened, his  heart ready to jump out of his mouth, his heart beat  increased to almost two hundred  beats per minute, he would have retraced his steps but his feet failed, he would have knelt and begged, but the students who couldn’t run were looking up to him.

Finally, he gathered the courage to talk to her

With her face burning red as a wounded  lion, she  barked

With that she packed her books into her bag and made for the door, never in her life had she been that angry. In no time, the school security paraded her as though she were a machine…

At the close of lectures, people filed out of the lecture room gradually, till none but Susan was left. Mr. Mahrmed stood beside the white board humming his favourite song  while  arranging his property in no particular order. She stood before him as a bird with broken wings,
“Sit  Miss”

He searched inside the class  cupboard, brought out a booklet and placed it before her, she looked at the papers and saw not a word on it. Instead, a stare on the papers brought back memories of her early days. she remembered the first time she was asked to meet with her tutor at the end of the school day, she was in JSS 1 then,  She had scored hundred percent in an arithmetic  test where other students had struggled with forty or fifty percent. The teacher  had told her to rewrite the test in her presence in a bit to curb malpractice, That day, she had left the teacher with her head placed on the high heavens and that’s how she was given the name Copper Stone, a name she bore till she left her Junior Secondary.

This time around it was different,  her vision had been blurred with fear,  she could neither read a letter nor a word in the booklet. Mr  Mahrmed sat there watching her for some time, then he placed his hands  on the desk and leaned towards her.

“These rules you see, are meant not  meaningless, If your continuous assessment record is not up to forty percent, you will not be allowed to write the examination”

“Do you  think I can cope here”

“You can if you’re determined”

The pages of each day opened with what seemed like the speed of light till it paused on a day in which she decided to swallow the jawbone of a lion,
She sat in the front row, a place reserved for students ready to be shaken by boisterous lecturers, wondering why others resorted to pack themselves up  as fishes in an airless container behind.

The first lecturer, Mr Idapeyo in his cunning style had broken the spell that prevented the mic from reaching behind. After the break, the front row was filled in no time, with books, laptops… and  few persons. Some students glanced through their gadgets, looking up the topic to be handled by  the next lecturer, others chatted with colleagues in high spirits while some walked almost from desk to desk exchanging peasantries.

As the door opened, every one took their calm. It was a craft class. The lecturer who introduced himself as “Dr. Mahrmed  de Craftsman” was specially blessed with the gift of impacting  Susan observed.

She would have concluded, this was the best place to stay, had Mahrmed not directed the class to sketch a model of the globe, others went busy on their sketch  boards,  she  stood there, observing and admiring each sketch.

“Y’all know I hate lazy students”  Mahrmed said as he walked towards Susan.

“You mean you’ve attempted nothing on this board?”

He wanted to drag her hands to the sketch board amidst his rant, but his hands held an empty sleeve, he looked at her again, her face was dull, her round cheeks suddenly flattened, she would have cried but those days were gone

“Meet me after this class”

This is a text widget. The Text Widget allows you to add text or HTML to your sidebar. You can use a text widget to display text, links, images, HTML, or a combination of these. Edit them in the Widget section of the Customizer.
writingcarrel
Create a free website or blog at WordPress.com.
Loading Comments...
Comment
×